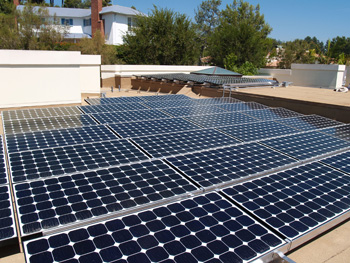 Last week, the Senate and Assembly passed AB 327 with a majority of the vote. Now, the bill is headed to California Governor Jerry Brown’s desk for the final signature. The bill marks some losses for the solar industry, but thanks to the hard work of CALSEIA and other solar advocates certain amendments were made so that the bill shines bright for solar as well.

A few weeks ago, AMECO Solar wrote about AB 327 and how it could negatively affect individual solar system owners along with the solar industry as a whole. At this point, there were two parts of the bill that were a cause of worry: 1) the future of the Net Energy Metering (NEM) program and 2) the possibility of a mandatory monthly charge for all utility customers.

One loss is that the monthly surcharge has passed. Whether you own solar panels or not, you will have to pay $10 a month for merely accessing the grid and using electricity.

It’s possible that solar owners will not have to pay the charge initially and will be grandfathered in, but the details of the “grandfathering provision” will be hammered out in the coming months before the bill turns into a law.

Amendments were made to the net metering portion of the bill that accomplished goals for the solar industry.

Current solar owners enrolled in the NEM program can rest easy for now. AB 327 was amended so that your contracts will be protected and you will be granted a reasonable pay-back period based on when you originally enrolled in the program.

Even better, the amendment removed the 2014 deadline of the NEM program and extended it so another 5,500 MW of solar customers can enroll in the program between now and July 2017. This extension means a lot for residential solar installation companies as NEM is a huge incentive for potential solar customers, especially as utility rebate programs are entering their last steps and closing down.

The bill also demands that the CPUC (California Public Utilities Commission) develop a new net metering program, which solar advocates have dubbed as “NEM 2.0”, by March 2014. While the prospect of a future net metering program seems like a win, it’s uncertain how the CPUC will design the program. Due to this uncertainty, CALSEIA and those that support the organization will need to be a constant presence at the legislative level so that “NEM 2.0” will be beneficial.

All eyes will be on California during these next eight months. As a solar leader in the nation, the solar policies and legislature that develop in our state inevitably have an effect on solar in other states. Once needed, AMECO Solar will request that our customers and other solar enthusiasts take action so that our voice is heard by state leaders.