Before and After: Newport Beach Solar Installation

At some point, solar panels got a bad reputation of being ugly. With so many unsightly solar panel installations out there, we’re not entirely surprised. Sometimes it is the solar installation that sticks out like a sore thumb that tends to stay in our minds. We have even seen just one ugly solar installation change the mindset of an entire neighborhood!

However, a skilled solar company will always keep aesthetics in mind. It is important not only to seriously consider the concerns of the homeowner, but to arrange the panels so that they blend in or appear balanced with the architecture. Over the past 40 years, our solar consultants have designed solar systems that appear in sync with a home’s roof or are hidden from view.

As proof of how solar systems can actually be pleasing to the eye, we are going to highlight beautiful solar installations on our blog every once in a while. Each post will include “Before and After” photos, and a brief description of the techniques used during the installation. 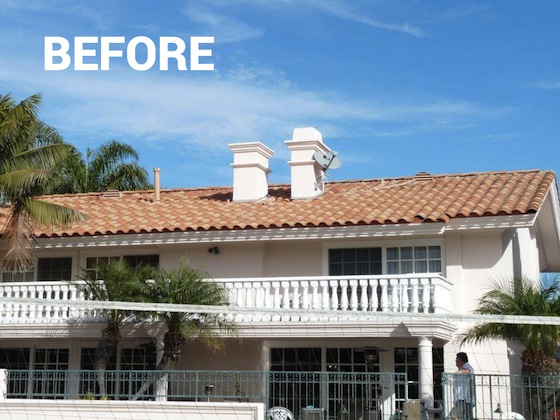 First up, we have this solar project that was recently completed in Newport Beach. As you can see in the “Before” photo above, our customer owns a beautiful two-story house with a Spanish tile roof.

And here is the “After” photo! Now, we not only have a beautiful Southern Californian home, but we also have 28 solar panels that are providing our customer with solar energy. 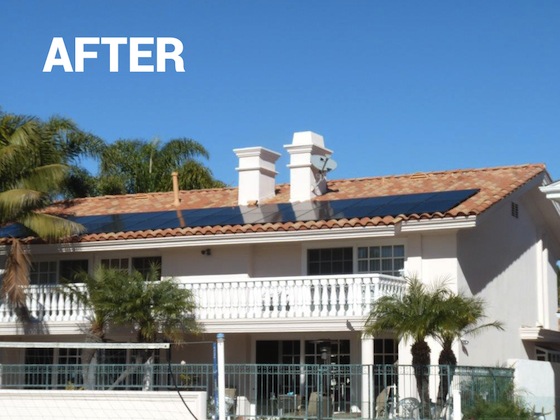 Working closely with a roofing company, we first removed the Spanish tiles where the solar panels would be placed. Then, the mounting hardware was installed at the same time as the roofing paper and comp shingles. This ensures that there will be a watertight roof underneath the solar panels.

Finally, we installed the solar panels in line with the Spanish tile. We made sure to leave a certain amount of space between the roof and the solar panels. Not only does this meet city code but it also allows air to flow beneath the solar panels, which helps with efficiency. The space will also still prevent debris (such as leaves) from building up underneath.

Since the solar panels and Spanish tiles are roughly at the same level, the sight line of the roof is not disrupted and the final look is sleek.

Another thing that contributes to the sleek appearance of the solar array is this particular solar panel from the SunPower E-Series. The design is known as “black on black” meaning that they are black solar cells on a black background. Most people find this all black design to be more aesthetically pleasing than “black on white” solar panels.

By choosing a high wattage solar panel (the SPR-E20-327 has 327 watts per solar panel), the customer only needed 28 solar panels to offset their electricity usage. If we had installed a more conventional 200-250 watt solar panel, then more solar panels would have been required and the roof would have looked more crowded.

There you have it! Yet another beautiful solar panel installation from AMECO Solar located in sunny Newport Beach, California. Those interested in seeing more solar installations may visit the solar electric system photo gallery on our website or read articles about our solar customers that are featured on the company blog.