Are the solar roadways covered in snake oil? 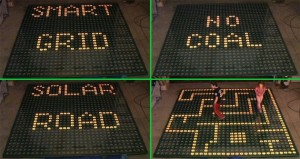 They did pass their traction tests, but the excitement for solar roadways is a little premature.  Is the product innovative? #Totally. Here’s a quick rundown of what the Solar Roadways phenomenon is about.  Several years back, the Federal Highway Administration funded a project for roadways that could pay for themselves.  Solar Roadways’ prototype provides modular roads with solar panels integrated within them to generate electricity.  They will also be fitted with heaters and LED’s to clear roads of ice and warn drivers of conditions ahead. There are many other features that make it great, and we’ll save reality for last.

Why did this pipe dream go viral?

Good public relations and a revolutionary new type of road.  Solar panels last for 25 years and often see a payback within ten years or less.  That concept alone of a road that can last 25 years and create a return on investment is already better than stinky asphalt.  I’ve been told that in other parts of the country; their roads get covered in frozen water and become difficult to drive on.  This prototype contains heaters that will melt all of that frozen water that will eliminate ice related accidents and snow plows. Pretty awesome if you’ve been stuck behind one or have seen the salts eat away at your car. 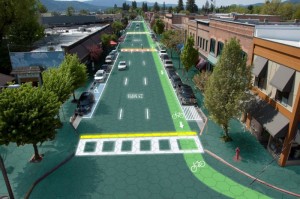 Next awesomeness, the LED warning system.  Personally, this is my favorite feature of the solar roadways and is totally viable for particular situations.  From this picture, you can see that the roadways will replace the painted stripes, crosswalks, etc.  In the middle of the photo, you can see someone crossing the street and the crosswalk turns red.  You can also see the speed limit displayed and the bike path illuminated.  We could instantly change the speed limit, warn drivers of pedestrians or wildlife, or any other emergency situation.

Pave all the roads with solar!

They want to put these roadways everywhere.  Installers have a general rule of thumb, don’t install solar where the sun don’t shine.  Here’s a quick list of things that cause shade, everything that is not transparent like a tree, a building, or a car. The designers have danced around the question of which solar technology they will use.  Photovoltaic crystalline panels actually have serious performance issues even in partial shade because of weird physics voodoo that exponentially messes up production. Thin film solar does not share this issue and only loses ten percent of production when ten percent is shaded.  Thin film is flexible and theoretically cheaper, but it’s less efficient.  I would feel more confident with them using thin film while we put efficient PV on the roofs. They are currently using microinverters and from pictures it appears as they are using crystalline cells.  This adds cost and more components that can break.  They have been working the numbers though, and microinverters might be the most cost-effective solution to increase production.

Shade is the enemy

Roads get shade from just about everything because they are the lowest point.  A lot of things are built next to roads because that’s um…. #convenient. Buildings cast huge shadows.  I think Solar Roadways have potential in downtown intersections to safely alert drivers of pedestrians, bicyclists, and snow.

There are a lot of other cool possibilities with these from cabling conduits, wastewater treatment, piezoelectric generators, etc.  My sort of problem is that it shouldn’t be seen as a solution to climate change or meeting renewable energy requirements.  It is a solution to a safer society. There is no possible way that these road modules will be more efficient than a roof or ground mounted solar system.  The roadways have thick textured glass, that can withstand 250,000 POUNDS, that will get dirty and obstruct light from hitting the solar cell.

After reading a few other critical roadways articles, it’s apparent they aren’t there yet. The sound alone from the textured surface makes a silent, clean technology annoying.  We need to take a step back and remember that this is still in its prototyping phase.  Lots of stuff can change and lots of stuff can prevent it from coming to fruition.  Sit back and join Ameco in installing effective, affordable solar solutions.

Related Articles:
Analytical look at the cost, durability and installation

Founders reply to the “haters”