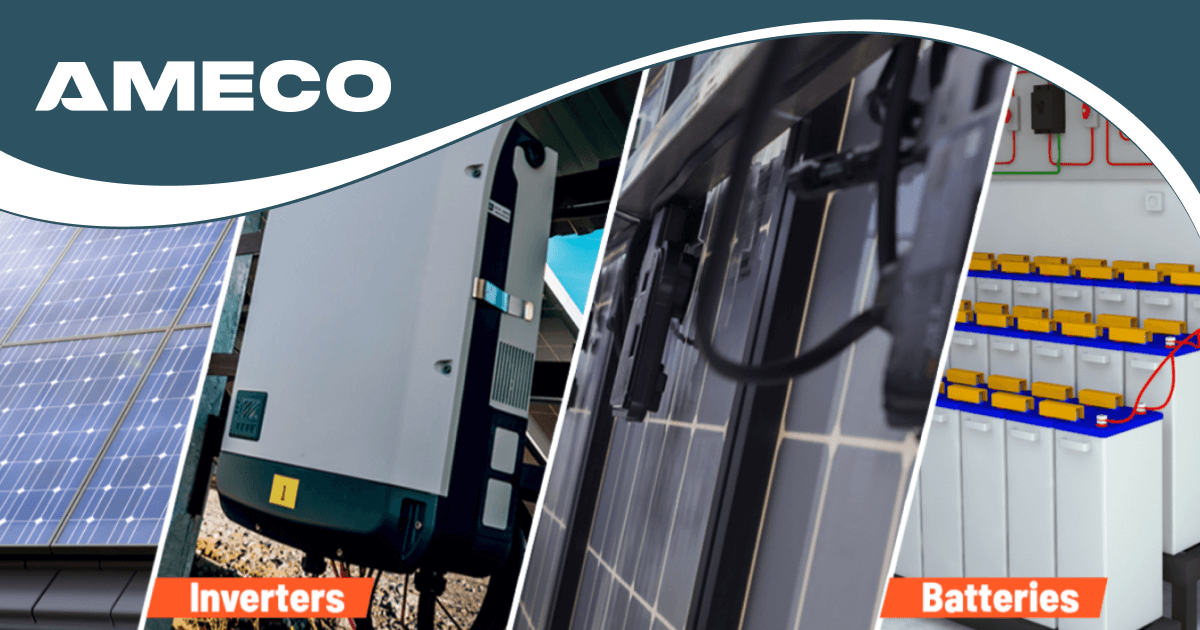 Now, let’s get into the components.

The part of a solar power setup that most people are familiar with is the solar panel. Photovoltaic or solar panels are highly visible and essential components of any solar energy system.

Although they can also be positioned on the ground, solar panels are typically mounted on the roofs of buildings and automobiles. In a sense, they serve as solar's "face." You can likely determine who uses solar energy to power their home by looking for a solar panel system on their roofs.

In order to capture as much sunlight as possible during the day, they can be adjusted at various angles.

One of the solar energy advantages can be provided by using inverters. They serve the function of converting the DC electricity generated by the solar panels into 240V AC electricity, which powers every appliance in your house. The inverter is a robust piece of machinery that operates continuously for the duration of your system, making it the component most prone to develop problems. This indicates that they typically only have a 10-year warranty.

Practically speaking, an inverter enables you to use other main electrical items that can be plugged into the electrical outlets of your solar panels, including computers, vacuum cleaners, lamps, and so on.

String inverters and microinverters are the two primary categories of inverters. The energy from a string of panels (for residential systems, this is often the whole system) is converted into AC electricity by a string inverter and used in your house or other properties. The best solar panel has microinverters mounted on the rear, enabling the energy produced by the panels to exist separately from one another.

In a string inverter system, the performance of the other panels is likewise impacted when partial shadowing occurs on one panel. This is when microinverters come to help by raising the cost of the system while letting the panels work independently and allowing you to gain the benefits of solar energy fully.

The racking/mounting is the third key part of a home solar power system. This is how your panels are firmly fastened to your roof. You won't have to worry about your selection of mounting or racking if you hire a reputable company for your solar panel installation, as they only use high quality equipment.

The extra energy your solar panels produce can be sent back into the grid if it is greater than your home needs. On the other hand, energy will be extracted from the grid if you use power during periods when your solar panels aren't generating it or if you use more energy than they generate. This is where the electric meters come in. The meter tracks the amount of electricity coming into and leaving your house, enabling homeowners with solar panels to reduce their monthly energy costs. Thanks to this, grids are important for achieving an all in one solar power system.

Batteries are one of the most convenient solar energy solutions, as they store daytime energy, which may be used at night when the system is not producing electricity. Battery technology is gradually becoming a more practical solution for people who largely utilize their energy at night.

First and foremost, AMECO Solar & Roofing, a leading solar panel company based in California, partners with top-tier manufacturers. We want the best for our customers; that's why we use goods that will function for decades, requiring no upkeep from our consumers.

Additionally, AMECO makes things simple for its clients by acting as a one-stop shop that handles many services simultaneously, saving you a great deal of time and effort.

So, if you’re planning to go solar, contact AMECO now for a reliable and high-quality solar power system.